A recent SurveyMonkey poll showed that, while the majority of all Americans trust CNN more than President Donald Trump, 89% of all Republicans trust Trump more than CNN.

In this article, I will attempt to explain why the two political parties widely disagree on the legitimacy of the mainstream press, represented by CNN, and also deeply disagree on the veracity of the current President of the United States.

But first a quick bit of background.

The Cambridge Dictionary defines “preconception” as “an idea or opinion formed before enough information is available to form it correctly.”

Both Democrats and Republicans are guilty of preconception.

Why Democrats trust CNN but not the President

Let’s look first at why Democrats are overwhelmingly more likely to trust CNN than President Trump.

CNN’s slogan is “the most trusted name in news.” To reinforce their trustworthiness, the network has a policy of quickly retracting and correcting reporting errors and quickly terminates the employment of people who act contrary to their sought-after brand of fairness and honesty in their reporting ([1] [2] [3] [4]). They have both Democrats and Republicans on their political discussion panels, often equally balanced in number on purpose. For these reasons, Democrats tend to trust CNN’s reporting. (Note: according to a Pew Research study, Liberals and “mixed” trust CNN, while Conservatives do not. More about that below.)

But CNN has a definite point of view. Every news outlet must have a consistent notion of what constitutes truth, fairness and accepted norms. One can get a sense of CNN’s point of view by the “neutral”  expert panelists they employ and the special broadcasts they air when not reporting the news. Their neutral experts mostly accept that the status quo in America today is pretty good. Generally, we are safe at home, unemployment is low and there is a Starbucks on nearly every corner. Sure, things aren’t perfect: wages are largely stagnant, many Americans are struggling in various ways and there are angry people out there who sometimes commit mass murders. But taken as a whole, things are generally positive, and if we all work together, we can make things even better.

One group of “neutral”  experts are “authorities” on Donald Trump – people who have written books about him or been a ghostwriter for him. Most of these character experts paint a very disturbing picture of our current president. To be fair, CNN also puts positive character experts on the air sometimes, too.

Like every other news outlet, CNN realizes there is a public fascination for all things concerning Donald Trump. During the Republican primary season of 2015 and 2016, CNN was criticized for giving much more coverage to candidate Trump than the other Republican candidates. Once Trump got the nomination, and subsequently won the election, most would agree it was appropriate to continue extensive coverage of Trump, but CNN focused much of their coverage on Trump’s deviation from what CNN considers to be accepted norms and thus gave more negative coverage than positive to Mr. Trump. In particular, after Trump was inaugurated, at times it seemed like CNN was the 24-hour Russia collusion and obstruction of justice news channel.

As I mentioned earlier, Democrats have the preconception that Trump is an unethical and self-serving narcissist and a pathological liar. To back up their beliefs, they point to information from the mainstream media. For example, PolitiFact says 69% of the claims he has made they have found mostly false, false or pants on fire, whereas the previous president, Obama, has 26% in the false range. (“Lyin’ Ted Cruz” comes in at 77% false.) The failing NY Times keeps a running list of verifiable lies by Trump under the title Trump’s Lies.

Republicans distrust the mainstream media, particularly the New York Times. Some classify PolitiFact as having liberal bias, despite its claim of nonpartisanship.

Why Republicans trust the President but not CNN

While the Democrats generally felt the US was in pretty good shape at the end of Obama’s eight years as president, Republicans generally believe Obama left the nation in bad shape with out of control Big Government and that only a heroic disrupter (i.e., Trump) could go to Washington and get the country back on track.

The Republicans are a varied group which Nate Silver divided into five overlapping segments in 2015:

One unifying theme that brings some of the above segments together is “national identity”, which a study by the nonpartisan Democracy Fund found to be a major issue separating those voters who preferred Donald Trump to Hillary Clinton in the US Presidential Election of 2016. Trump struck a nerve with his stances against Hispanic illegal immigrants, against radical Islamic terrorism and for “law and order” (the antithesis of Black Lives Matter).

Trump also struck a chord with his “Drain the Swamp” slogan where he ran against the Washington Establishment, both Democrats and Republicans. “Drain the Swamp”,  along with slogans “I love the uneducated” and “liberal mainstream media”, catered to the strong resentment among the less-educated towards the “educated elite” whom they blame for threatening their way of life and a rapidly changing world that is leaving them behind.

To appeal to the Christian Conservatives, he hammered on religious freedom and school choice. To appeal to the Republican Establishment and Moderates, he condemned his predecessor Barack Obama at every turn. One additional political move was arguing strongly against globalism, which won him crucial votes among blue-collar rust belt workers in states bordering the Great Lakes, thereby enabling razor-thin victories in Pennsylvania, Michigan and Wisconsin, putting him over the top in Electoral College votes.

As a result, Trump is the Great Orange Hope of the Republican party. Most Republicans look at him as a savior who will right all the wrongs committed during the presidencies by people with surnames Bush, Clinton and Obama.

To most Republicans, Trump tells the truth. I confronted some of my Republican friends to ask them how they can justify their belief that Trump is trustworthy when there are so many examples of his being untruthful, such as the birther issue, alleged Obama wiretaps, inauguration crowd sizes, etc., and their responses varied, but here is a sample of common answers:

As I stated earlier, the Republican party is quite diverse, so reasons for trusting Trump are likely different from person to person, but clearly a number of Republicans trust Trump for one or more of the following reasons:

Republicans were distrustful of CNN and the other mainstream press well before Trump labeled them “fake news” and “enemy of the people”. We can see in the Pew Research study from 2014 (mentioned earlier) that strong Conservatives trust Fox News but distrust CNN.

The primary reason for the distrust can be gleaned by re-reading the section above “Why Democrats trust CNN”. Most of the reasons why Democrats trust CNN are reasons why most Republicans distrust it. Basically, Democrats believe that current societal norms (the role of government, celebration of diversity, acceptance of globalism, embrace of progress) are good, whereas Republicans generally think those norms are destroying the country. CNN’s world view reflects that of Democrats, many Independents and a percentage of more moderate Republicans, and is contrary to the world view of most other Republicans.

How to bring the two alternate universes together

According to the chart at the beginning of this post, 50% of adult Americans trust CNN more than President Trump and 43% trust the President more than CNN. In this post, I have argued that the 50% and the 43% have widely different world views – divisions that run very deep, so deep that the two groups have different notions about truth and facts.

In the US, we have often had wide and strong differences of opinion, but the divide is more acute, more fundamental and more dangerous now than anytime since World War II. I examined the reasons for the current political divide in my previous blog post, “Our Extreme Partisan Divide: How It Happened, How To Fix“. I strongly recommend reading that post as a companion to this one. Also, read the Pew Research report that underlines just how divided America is today: The Partisan Divide on Political Values Grows Even Wider.

The key to bringing the two universes together is that every single individual who cares about the American democracy needs to stop demonizing and demeaning people on the other side and instead sincerely try to understand their point of view, fundamental core values and vision for the future. We must all try to listen and understand each other, discover mutual common ground, agree on a set of rules for resolving our differences (i.e., the democratic process), follow those rules and accept the outcomes as legitimate even if we disagree.

Most Democrats and Republicans will read the following quote from way back in 1944 and agree that it matches their core political-economic philosophy:

The successful use of competition does not preclude some types of government interference. For instance, to limit working hours, to require certain sanitary arrangements, to provide an extensive system of social services is fully compatible with the preservation of competition. There are, too, certain fields where the system of competition is impracticable. For example, the harmful effects of deforestation or of the smoke of factories cannot be confined to the owner of the property in question. But the fact that we have to resort to direct regulation by authority where the conditions for the proper working of competition cannot be created does not prove that we should suppress competition where it can be made to function. To create conditions in which competition will be as effective as possible, to prevent fraud and deception, to break up monopolies – these tasks provide a wide and unquestioned field for state activity.

The above quote is from the Reader’s Digest Condensed version of Friedrich A. Hayek’s classic “The Road to Serfdom”  where he argues for modern-day capitalism rather than (true) socialism as was found in the now-defunct Soviet Union and later in Mao’s Communist China. He argues for a decentralized free-market economy where means of production are owned and controlled by the citizens (where government gets involved only when necessary to fix real problems and promote free-market competition) rather than the collectivist, centralized planning of socialist countries where the government owns and controls all industry. Hayek says that not only is collectivism/socialism inefficient, it inevitably leads to the loss of freedom and a totalitarian state.

Let all of us, Democrats and Republicans, acknowledge our common core political-economic vision as outlined by Hayek above.

Our differences are mostly in the details about which problems warrant government involvement, how much and what kind. As I said earlier, if we all try to listen and understand each other, discover mutual common ground, agree on a set of rules for resolving our differences (i.e., the democratic process), follow those rules and accept the outcomes as legitimate even if we disagree, then we will be able to merge our two universes together and return to simply disagreeing with each other (hopefully, respectfully).

In conclusion, there are two different world views, with each side accusing the other of being brainwashed by the media. I believe the only way to bring people back to a shared notion of truth is to treat the other side with respect, find common ground and build mutual trust and respect from there, no matter how certain you are today that you are right and they are wrong. It just causes further division to continue to demonize and demean the other side.

Jon Ferraiolo is the author of  Holy War for True Democracy and the founder of the nonpartisan nonprofit Democracy Guardians. He has advanced ALS which has resulted in near-paralysis of his arms and hands. As a result, he wrote this article (including the chart), authored the book and launched the nonprofit using only his eyes. 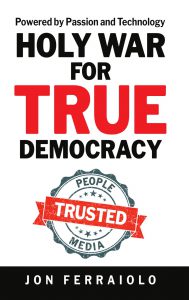